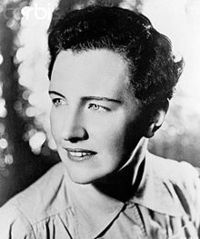 Mary Renault was an English writer best known for her historical novels set in Ancient Greece. In addition to vivid fictional portrayals of Theseus, Socrates, Plato and Alexander the Great, she wrote a non-fiction biography of Alexander.

Her historical novels are all set in ancient Greece. They include a pair of novels about the mythological hero Theseus and a trilogy about the career of Alexander the Great. In a sense, The Charioteer (1953), the story of two young gay servicemen in the 1940s who try to model their relationship on the ideals expressed in Plato's Phaedrus and Symposium, is a warm-up for Renault's historical novels. By turning away from the 20th century and focusing on stories about male lovers in the warrior societies of ancient Greece, Renault no longer had to deal with homosexuality and anti-gay prejudice as social "problems". Instead she was free to focus on larger ethical and philosophical concerns, while examining the nature of love and leadership. The Charioteer could not be published in the U.S. until 1959, after the success of The Last of the Wine proved that American readers and critics would accept a serious gay love story.