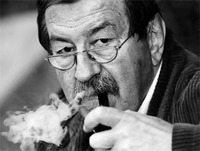 Günter Wilhelm Grass was a Nobel Prize-winning German novelist, poet, playwright, illustrator, graphic artist, and sculptor.
He was born in the Free City of Danzig (now Gdańsk, Poland). Since 1945, he lived in West Germany, but in his fiction he frequently returned to the Danzig of his childhood. He always identified himself as a Kashubian.

He is best known for his first novel, "The Tin Drum" (1959), a key text in European magic realism. His own name for this style was “broadened reality.” His other successes of the period were “Cat and Mouse” (1961) and “Dog Years” (1963). These novels, along with “The Tin Drum,” make up what Mr. Grass called his “Danzig Trilogy.”

Grass was born in the Free City of Danzig on 16 October 1927, to Willy Grass (1899-1979), a Protestant ethnic German, and Helene Grass (née Knoff, 1898-1954), a Roman Catholic of Kashubian-Polish origin. Grass was raised a Catholic. His parents had a grocery store with an attached apartment in Danzig-Langfuhr (now Gdańsk-Wrzeszcz). He has one sister, who was born in 1930.

Grass attended the Danzig Gymnasium Conradinum. He volunteered for submarine service with the Kriegsmarine "to get out of the confinement he felt as a teenager in his parents' house" which he considered - in a very negative way - civic Catholic lower middle class. In 1943 he became a Luftwaffenhelfer, then he was drafted into the Reichsarbeitsdienst, and in November 1944, shortly after his seventeenth birthday, into the Waffen-SS. The seventeen-year-old Grass saw combat with the 10th SS Panzer Division Frundsberg from February 1945 until he was wounded on 20 April 1945 and sent to an American POW camp.

In 1946 and 1947 he worked in a mine and received a stonemason's education. For many years he studied sculpture and graphics, first at the Kunstakademie Düsseldorf, then at the Universität der Künste Berlin. He also worked as an author and traveled frequently. He married in 1954 and since 1960 lived in Berlin as well as part-time in Schleswig-Holstein. Divorced in 1978, he remarried in 1979. From 1983 to 1986 he held the presidency of the Berlin Akademie der Künste (Berlin Academy of Arts).

During the German unification process in 1989 he argued for separation of the two states, because he thought a unified Germany would resume its past aggression.
He moved to the northern German city of Lübeck in 1995.
He was awarded the Nobel Prize in Literature in 1999. In 2006, Grass caused controversy with his disclosure of his Waffen-SS service during the final months of World War II, which he had kept a secret until publishing his memoir that year. He died of complications of lung infection on 13th of April, 2015 at a Lübeck hospital. He was 87.