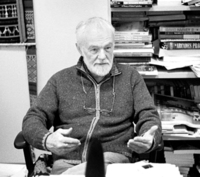 David Harvey (born 1935) is the Distinguished Professor of Anthropology at the Graduate Center of the City University of New York (CUNY). A leading social theorist of international standing, he graduated from University of Cambridge with a PhD in Geography in 1961. He is the world's most cited academic geographer (according to Andrew Bodman, see Transactions of the IBG, 1991,1992), and the author of many books and essays that have been prominent in the development of modern geography as a discipline. His work has contributed greatly to broad social and political debate, most recently he has been credited with helping to bring back social class and Marxist methods as serious methodological tools in the critique of global capitalism, particularly in its neoliberal form.