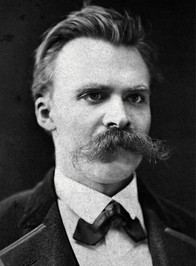 Friedrich Wilhelm Nietzsche (1844–1900) was a German philosopher of the late 19th century who challenged the foundations of Christianity and traditional morality. He was interested in the enhancement of individual and cultural health, and believed in life, creativity, power, and the realities of the world we live in, rather than those situated in a world beyond. Central to his philosophy is the idea of “life-affirmation,” which involves an honest questioning of all doctrines that drain life's expansive energies, however socially prevalent those views might be. Often referred to as one of the first existentialist philosophers along with Søren Kierkegaard (1813–1855), Nietzsche's revitalizing philosophy has inspired leading figures in all walks of cultural life, including dancers, poets, novelists, painters, psychologists, philosophers, sociologists and social revolutionaries.

From the Stanford Encyclopedia of Philosophy