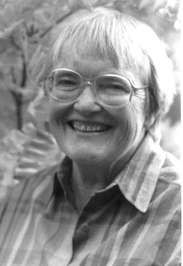 Gudrun Pausewang is a German writer for children and teens. She is also noted in science fiction for Young-Adult novels like The Last Children of Schewenborn.

Gudrun Pausewang was born in Eastern Bohemia of German ancestry and after World War II her family settled in the former West Germany. She later became a teacher and taught in Germany's foreign school services in South America. She has won several awards including the Bundesverdienstkreuz. She has written 86 novels with many of them involving the Third World and environmental concerns.

She won for Die Wolke (The Cloud) the Deutscher Jugendliteraturpreis and the Kurd-Laßwitz-Preis in 1988.