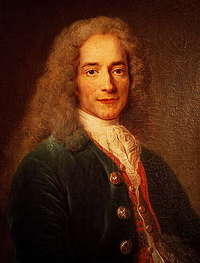 François-Marie Arouet, better known by the pen name Voltaire, was a French Enlightenment writer, essayist, deist and philosopher known for his wit, philosophical sport, and defense of civil liberties, including freedom of religion and free trade.

Voltaire was a prolific writer, and produced works in almost every literary form, authoring plays, poetry, novels, essays, historical and scientific works, over 20,000 letters and over two thousand books and pamphlets.

He was an outspoken supporter of social reform despite strict censorship laws and harsh penalties for those who broke them. A satirical polemicist, he frequently made use of his works to criticize Catholic Church dogma and the French institutions of his day.

His views of non-western peoples were sometimes ambiguous. While he often used China, Siam and Japan as examples of brilliant non-European civilizations and harshly criticized slavery[15], he also believed that Africans were a separate species, intellectually inferior to the Europeans, and that ancient Jews were "an ignorant and barbarous people" who, "deserve to be punished, for this is your destiny." Philosophical enlightenment was reserved chiefly for Europeans.

Voltaire is remembered and honored in France as a courageous polemicist who indefatigably fought for civil rights – the right to a fair trial and freedom of religion – and who denounced the hypocrisies and injustices of the ancien régime. The ancien régime involved an unfair balance of power and taxes between the First Estate (the clergy), the Second Estate (the nobles), and the Third Estate (the commoners and middle class, who were burdened with most of the taxes).

Taken in part from http://en.wikipedia.org/wiki/Voltaire