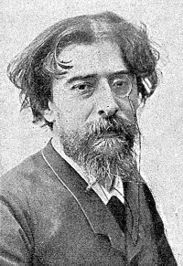 Aphonse Daudet was born in Nîmes, France. His family, on both sides, belonged to the bourgeoisie. The father, Vincent Daudet, was a silk manufacturer — a man dogged through life by misfortune and failure. Alphonse, amid much truancy, had a depressing boyhood. In 1856 he left Lyon, where his schooldays had been mainly spent, and began life as a schoolteacher at Alès, Gard, in the south of France. The position proved to be intolerable. As Dickens declared that all through his prosperous career he was haunted in dreams by the miseries of his apprenticeship to the blacking business, so Daudet says that for months after leaving Alès he would wake with horror, thinking he was still among his unruly pupils.
On 1 November 1857, he abandoned teaching and took refuge with his brother Ernest Daudet, only some three years his senior, who was trying, "and thereto soberly," to make a living as a journalist in Paris. Alphonse took to writing, and his poems were collected into a small volume, Les Amoureuses (1858), which met with a fair reception. He obtained employment on Le Figaro, then under Cartier de Villemessant's energetic editorship, wrote two or three plays, and began to be recognized, among those interested in literature, as possessing individuality and promise. Morny, Napoleon III's all-powerful minister, appointed him to be one of his secretaries — a post which he held till Morny's death in 1865 — and showed Daudet no small kindness. Daudet had put his foot on the road to fortune.