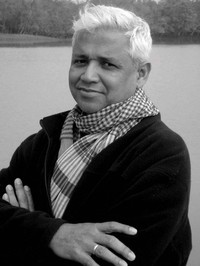 Amitav Ghosh is one of India's best-known writers. His books include The Circle of Reason, The Shadow Lines, In An Antique Land, Dancing in Cambodia, The Calcutta Chromosome, The Glass Palace, Incendiary Circumstances, The Hungry Tide. His most recent novel, Sea of Poppies, is the first volume of the Ibis Trilogy.

Amitav Ghosh was born in Calcutta in 1956. He studied in Dehra Dun, New Delhi, Alexandria and Oxford and his first job was at the Indian Express newspaper in New Delhi. He earned a doctorate at Oxford before he wrote his first novel, which was published in 1986.

The Circle of Reason won the Prix Medicis Etranger, one of France's top literary awards, and The Shadow Lines won the Sahitya Akademi Award and the Ananda Puraskar. The Calcutta Chromosome won the Arthur C. Clarke Award for 1997 and The Glass Palace won the Grand Prize for Fiction at the Frankfurt International e-Book Awards in 2001. The Hungry Tide won the Hutch Crossword Book Prize in 2006. In 2007 Amitav Ghosh was awarded the Grinzane Cavour Prize in Turin, Italy. Amitav Ghosh has written for many publications, including the Hindu, The New Yorker and Granta, and he has served on the juries of several international film festivals, including Locarno and Venice. He has taught at many universities in India and the USA, including Delhi University, Columbia, the City University of New York and Harvard. He no longer teaches and is currently writing the next volume of the Ibis Trilogy.

He is married to the writer, Deborah Baker, and has two children, Lila and Nayan. He divides his time between Kolkata, Goa and Brooklyn.