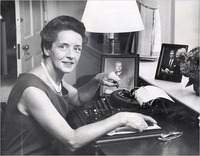 Ève Curie Labouisse, a journalist and humanitarian is best known for her biography of her mother, the Nobel Prize-winning scientist Marie Curie. Published in 1937, “Madame Curie” chronicled the life of Marie Curie, who earned the Nobel Prize twice, first in physics in 1903 and again in chemistry in 1911. The book quickly became a best seller and in 1943 was made into a Hollywood film, starring Greer Garson as Marie and Walter Pidgeon as Pierre.

In wide demand as a lecturer after “Madame Curie” was published, Mrs. Labouisse was also known for her staunch public advocacy of the Free French cause after the Nazis occupied France in 1940. After the war, she was a publisher of the French newspaper Paris-Press, and in the early 1950s was a special adviser to the secretary general of NATO.

Her other books include “Journey Among Warriors” (Doubleday, Doran, 1943), a best-selling account of her 40,000-mile trip across a series of wartime fronts: North Africa, Iraq, Iran, Russia, India, Burma and China.

Originally trained as a concert pianist, she performed throughout France and Belgium as a young woman and later wrote music criticism for several French periodicals. She was also considered to have been one of the most beautiful women in Paris in the 1920s and ’30s.In19 40, after France fell, Eve Curie went to England to work for the Free French. She later served in Europe with the women’s division of Gen. Charles de Gaulle’s Fighting French. In May 1941, the Vichy government revoked her French citizenship; she eventually settled in the United States.

In 1954, Eve Curie married Henry Richardson Labouisse, who was later the United States ambassador to Greece.