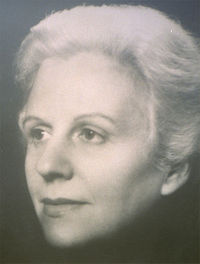 Mercè Rodoreda i Gurguí was a Spanish / Catalan novelist.

She is considered by many to be the most important Catalan novelist of the postwar period. Her novel "La plaça del diamant" ('The diamond square', translated as 'The Time of the Doves', 1962) has become the most acclaimed Catalan novel of all time and since the year it was published for the first time, it has been translated into over 20 languages. It's also considered by many to be best novel dealing with the Spanish Civil War.