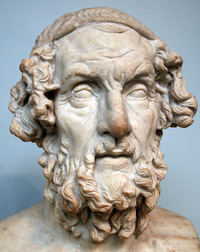 Homer (ancient Greek: Ὅμηρος), or Omero (in Italian), is a legendary ancient Greek epic poet, traditionally considered the author of the epic poems the Iliad and the Odyssey. No reliable biographical information about Homer survives from classical antiquity, and he is generally considered a legendary, rather than a historical figure. The Iliad and the Odyssey are now considered by many to be the products of a centuries-long tradition of orally composed poetry; the role of an individual poet, or poets, in composing the poems is a matter of dispute. According to some scholars, the Iliad and the Odyssey are the product of the same poet, but for others, such as Martin West and Seaford, the Iliad and the Odyssey were composed by different poets. For other scholars, such as Gregory Nagy, the epics are not the creation of any individual, but rather slowly evolved towards their final form over a period of centuries; in this view, the poems are the collective work of generations of poets.

Homer's works begin the Western Canon and are universally praised for their poetic genius. By convention, the compositions are also often taken to initiate the period of Classical Antiquity.