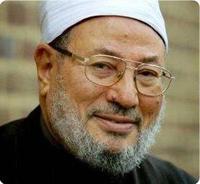 Yusuf Al-Qaradawi (يوسف القرضاوي) (born September 9, 1926) is an Egyptian Islamic theologian. He is best known for his programme, ash-Shariah wal-Hayat ("Shariah and Life"), broadcast on Al Jazeera, which has an estimated audience of 40 million worldwide. He is also well-known for IslamOnline, a popular website he helped found in 1997 and for which he now serves as chief religious scholar. Al-Qaradawi has also published more than 80 books, including The Lawful and the Prohibited in Islam and Islam: The Future Civilization. He has also received eight international prizes for his contributions to Islamic scholarship, and is considered one of the most influential such scholars living today. Al-Qaradawi has long had a prominent role within the intellectual leadership of the Muslim Brotherhood, an Egyptian political organization, but twice (in 1976 and 2004) turned down offers for the official role in the organization. A 2008 Foreign Policy magazine poll placed al-Qaradawi at number three on its list of the top 20 public intellectuals worldwide.

Some of al-Qaradawi's views have been controversial in the West, and he is banned from entering the United States, Israel and Great Britain. In 2004, 2,500 Muslim academics from Saudi Arabia, Iraq and from the Palestinian territories condemned Qaradawi, and accused him of giving "Islam a bad name."

As of 2004, al-Qaradawi was a trustee of the Oxford University Center for Islamic Studies. He also served as a technical consultant for a multi-million dollar epic movie in English on Muhammad.