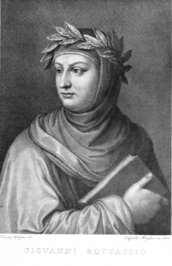 Giovanni Boccaccio (1313 – 21 December 1375) was an Italian author and poet, a friend and correspondent of Petrarch, and an important Renaissance humanist in his own right and author of a number of notable works including the Decameron, On Famous Women, and his poetry in the Italian vernacular. Boccaccio is particularly notable for his dialogue, of which it has been said that it surpasses in verisimilitude that of just about all of his contemporaries, since they were medieval writers and often followed formulaic models for character and plot.