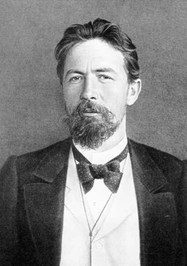 Anton Pavlovich Chekhov was born in the small seaport of Taganrog, southern Russia, the son of a grocer. Chekhov's grandfather was a serf, who had bought his own freedom and that of his three sons in 1841. He also taught himself to read and write. Yevgenia Morozova, Chekhov's mother, was the daughter of a cloth merchant.