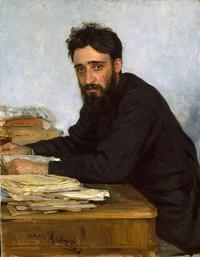 Vsevolod Garshin (Russian: Всеволод Михайлович Гаршин) is considered one of Russia's masters of short fiction. The son of a wealthy army officer, he served in the last of the Russo-Turkish Wars (1877 to 1878) and wrote his first story, "Four Days" (1877), while recovering from battle wounds. His subsequent stories, which were praised by Ivan Turgenev and Anton Chekhov, often dealt with the subject of evil. Garshin suffered from recurring bouts of mental illness and his masterpiece, "The Scarlet Flower" (1883), was based on his confinement in an asylum. He committed suicide at 33. His collected works were translated into English as "The Signal and Other Stories" (1912).