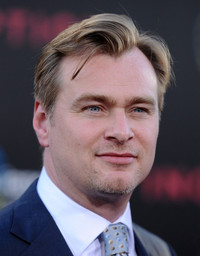 Christopher Jonathan James Nolan (born July 30, 1970) is a British-American film director, screenwriter and producer. He is known for writing and directing such critically acclaimed films as Memento (2000), the remake Insomnia (2002), the film adaptation The Prestige (2006), Inception (2010), and rebooting the Batman film franchise. The latter made him the second most commercially successful British director in recent years, behind David Yates. Nolan is the founder of the production company Syncopy Films.

Nolan's wife Emma Thomas has produced most of his films, with the exception of Memento and Insomnia. Lee Smith has been Nolan's editor since Batman Begins, with Dody Dorn editing Memento and Insomnia. Wally Pfister has served as cinematographer for all of Nolan's films starting with Memento. David Julyan composed music for Following, Memento, Insomnia, and The Prestige, while Hans Zimmer provided music for Batman Begins, The Dark Knight, and Inception.