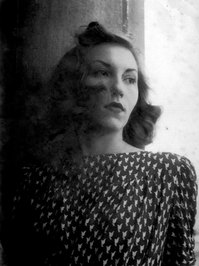 Clarice Lispector was a Brazilian writer. Acclaimed internationally for her innovative novels and short stories, she was also a journalist. Born to a Jewish family in Podolia in Western Ukraine, she was brought to Brazil as an infant, amidst the disasters engulfing her native land following the First World War.

She grew up in northeastern Brazil, where her mother died when she was nine. The family moved to Rio de Janeiro when she was in her teens. While in law school in Rio she began publishing her first journalistic work and short stories, catapulting to fame at age 23 with the publication of her first novel, 'Near to the Wild Heart' (Perto do Coração Selvagem), written as an interior monologue in a style and language that was considered revolutionary in Brazil.

She left Brazil in 1944, following her marriage to a Brazilian diplomat, and spent the next decade and a half in Europe and the United States. Upon return to Rio de Janeiro in 1959, she began producing her most famous works, including the stories of Family Ties (Laços de Família), the great mystic novel The Passion According to G.H. (A Paixão Segundo G.H.), and the novel many consider to be her masterpiece, Água Viva. Injured in an accident in 1966, she spent the last decade of her life in frequent pain, steadily writing and publishing novels and stories until her premature death in 1977.

She has been the subject of numerous books, and references to her and her work are common in Brazilian literature and music. Several of her works have been turned into films and she was the subject of a recent biography, Why This World, by Benjamin Moser.