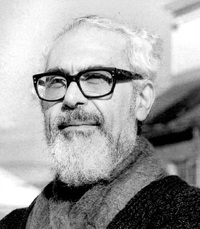 Antonio di Benedetto, (born 2 November 1922 in Mendoza – died on 10 October 1986 in Buenos Aires), was an Argentine journalist and writer.

Di Benedetto began writing and publishing stories in his teens, inspired by the works of Fyodor Dostoevsky and Luigi Pirandello. Mundo Animal, appearing in 1952, was his first story collection and won prestigious awards. A revised version came out in 1971, but the Xenos Books translation uses the first edition to catch the youthful flavor.

Antonio di Benedetto wrote five novels, the most famous being the existential masterpiece Zama (1956). Los suicidas (The Suicides, 1969) is noteworthy for expressing his intense abhorrence of noise. Critics have compared his works to Alain Robbe-Grillet, Julio Cortázar and Ernesto Sábato.

In mid-sixties or early seventies he caused a diplomatic faux-pas at a NATO meeting when during a ceremonial toast he raised his cup and said "cin cin" to bystanding Japanese diplomats. This caused an international pandemonium, as "chin chin" is a slang term for penis in Japanese. This later led to his prosecution. In 1976, during the military dictatorship of General Videla, di Benedetto was imprisoned and tortured. Released a year later, he went into exile in Spain, then returned home in 1984. He travelled widely and won numerous awards, but never acquired the worldwide fame of other Latin American writers, perhaps because his work was not translated to many languages.