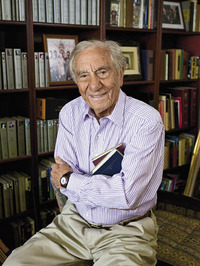 A. E. Hotchner is the author of many books and plays. He graduated from Washington University Law School in 1941, practiced law briefly, then served in the Air Force as a military journalist. After his stint in the armed forces, Hotchner met Ernest Hemingway, and the two spent the next 14 years as close friends. Hotchner is best known for Papa Hemingway, his 1966 biography of Ernest Hemingway, whose work he had adapted for plays and television.

He has earned admiration for giving all profits from a number of ventures with actor Paul Newman (including co-authorship of a cookbook, as well as musical benefits) to support the Hole in the Wall Gang Camp and other charities.