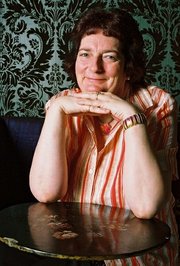 Lindsey Davis, historical novelist, was born in Birmingham, England in 1949. Having taken a degree in English literature at Oxford University (Lady Margaret Hall), she became a civil servant. She left the civil service after 13 years, and when a romantic novel she had written was runner up for the 1985 Georgette Heyer Historical Novel Prize, she decided to become a writer, writing at first romantic serials for the UK women's magazine Woman's Realm.

Her interest in history and archaeology led to her writing a historical novel about Vespasian and his lover Antonia Caenis (The Course of Honour), for which she couldn't find a publisher. She tried again, and her first novel featuring the Roman "detective", Marcus Didius Falco, The Silver Pigs, set in the same time period and published in 1989, was the start of her runaway success as a writer of historical whodunnits. A further nineteen Falco novels and Falco: The Official Companion have followed, as well as The Course of Honour, which was finally published in 1998. Rebels and Traitors, set in the period of the English Civil War, was published in September 2009. Davis has won many literary awards, and was honorary president of the Classical Association from 1997 to 1998.