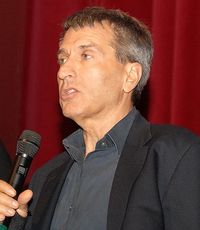 Nicholas Meyer graduated from the University of Iowa with a degree in theater and film-making, & is a film writer, producer, director and novelist best known for his involvement in the Star Trek films. He is also well known as the director for the landmark 1983 TV-Movie "The Day After", for which he was nominated for a Best Director Emmy Award. In 1977, Meyer was nominated for an Adapted Screenplay Academy Award for adapting his own 1974 novel, The Seven-Per-Cent Solution, to the screen.

In addition to his work on Star Trek, Meyer has written several novels, and has written and/or directed several other films.Most notable being the 1983 made-for-television anti-nuclear movie The Day After.

Meyer wrote three Sherlock Holmes novels: The West End Horror, The Canary Trainer, and The Seven-Per-Cent Solution. The latter was Meyer's most famous Holmes novel and the project for which he was best known prior to his Star Trek involvement. It was also adapted into a 1976 film, directed by Herbert Ross, for which Meyer wrote the screenplay.