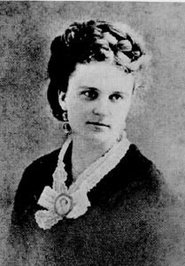 Kate Chopin was an American novelist and short-story writer best known for her startling 1899 novel, The Awakening. Born in St. Louis, she moved to New Orleans after marrying Oscar Chopin in 1870. Less than a decade later Oscar's cotton business fell on hard times and they moved to his family's plantation in the Natchitoches Parish of northwestern Louisiana. Oscar died in 1882 and Kate was suddenly a young widow with six children. She turned to writing and published her first poem in 1889. The Awakening, considered Chopin's masterpiece, was subject to harsh criticism at the time for its frank approach to sexual themes. It was rediscovered in the 1960s and has since become a standard of American literature, appreciated for its sophistication and artistry. Chopin's short stories of Cajun and Creole life are collected in Bayou Folk (1894) and A Night in Acadie (1897), and include "Desiree's Baby," "The Story of an Hour" and "The Storm."