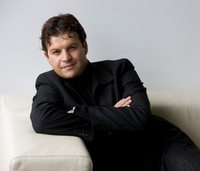 One of the most popular authors in France today. From his early childhood with reading books and plays, Guillaume Musso became convinced that one day, he too would write novels. After finishing high school in France, Guillaume Musso left for the United States at the age of 19. He spent several months in New York City, living with other young foreigners and earning his money by selling ice-cream. He came home to France with his head filled with ideas for novels. The readers can easily see the influence his time in the United States has had on him, as the action in his books takes place overseas. He currently teaches in a high school in the south of France, all the while working on his novels. His first published novel was with Editions Anne Carriere in 2001: Skidamarink. this novel did not reach out to the masses however, but his following novels published on XO Editions have all been hugely successful, some of them translated into 20 languages. His novel, Afterwards, has been adapted to the big screen and was in cinemas January 2009, starring John Malkovich, Evangeline Lily and Romain Duris.