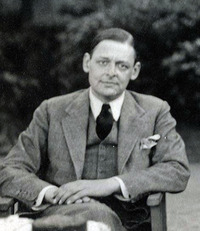 Thomas Stearns Eliot was a poet, dramatist and literary critic. He received the Nobel Prize in Literature in 1948 "for his outstanding, pioneer contribution to present-day poetry." He wrote the poems The Love Song of J. Alfred Prufrock, The Waste Land, The Hollow Men, Ash Wednesday, and Four Quartets; the plays Murder in the Cathedral and The Cocktail Party; and the essay Tradition and the Individual Talent. Eliot was born an American, moved to the United Kingdom in 1914 (at the age of 25), and became a British subject in 1927 at the age of 39.