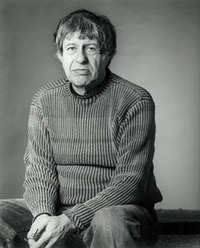 Ivan Klíma (born 14 September 1931, Prague, born as Ivan Kauders) is a Czech novelist and playwright. He has received the Magnesia Litera Award and the Franz Kafka Prize, among other honors.

Klíma's early childhood in Prague was happy and uneventful, but this all changed with the German invasion of Czechoslovakia in 1938, after the Munich Agreement. He had been unaware that both his parents had Jewish ancestry; neither were observant Jews, but this was immaterial to the Germans.
In November 1941, first his father Vilém Klíma, and then in December, he and his mother and brother were ordered to leave for the concentration camp at Theriesenstadt (Terezín), where he was to remain until liberation by the Russian Liberation Army in May, 1945. Both he and his parents survived incarceration—a miracle at that time—Terezín was a holding camp for Jews from central and southern Europe, and was regularly cleared of its overcrowded population by transports to "the East", death camps such as Auschwitz.
Klíma has written graphically of this period in articles in the UK literary magazine, Granta, particularly A Childhood in Terezin. It was while living in these extreme conditions that he says he first experienced “the liberating power that writing can give”, after reading a school essay to his class. He was also in the midst of a story-telling community, pressed together under remarkable circumstances where death was ever-present. Children were quartered with their mothers, where he was exposed to a rich verbal culture of song and anecdote.
This remarkable and unusual background was not the end of the Klíma's introduction to the great historical forces that shaped mid-century Europe. With liberation came the rise of the Czech Communist regime, and the replacement of Nazi tyranny with proxy Soviet control of the inter-war Czech democratic experiment. Klima became a member of the Communist Party of Czechoslovakia.[4] Later, his childhood hopes of fairy tale triumphs of good over evil became an adult awareness that it was often “not the forces of good and evil that do battle with each other, but merely two different evils, in competition for the control of the world”.
The early show trials and murders of those who opposed the new regime had already begun, and Klíma's father was again imprisoned, this time by his own countrymen. It is this dark background that is the crucible out of which Klíma's written material was shaped: the knowledge of the depths of human cruelty, along with a private need for personal integrity, the struggle of the individual to keep whatever personal values the totalitarian regimes he lived under were attempting to obliterate.
For his writing abilities, Ivan Klíma was awarded Franz Kafka Prize in 2002 as a second recipient. His two-volume memoir Moje šílené století ("My Crazy Century") won the Czech literary prize, the Magnesia Litera, in the non-fiction category in 2010.