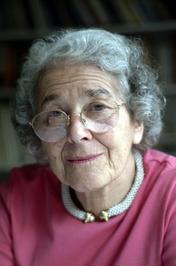 Judith Kerr is a German-born British writer and illustrator who has created both enduring picture books such as the Mog series and The Tiger Who Came To Tea and acclaimed novels for older children such as the autobiographical When Hitler Stole Pink Rabbit which give a child's-eye view of the Second World War.

Kerr was born in Berlin but left Germany with her parents and her brother, Michael Kerr, in 1933, soon after the Nazis first came to power. They were forced to leave as her father, noted drama critic, journalist and screenwriter Alfred Kerr, had openly criticised the Nazis. His books were burned by the Nazis shortly after the family fled Germany. They travelled first to Switzerland and then on into France, before finally settling in Britain, where she has lived ever since. She subsequently became a naturalised British citizen.