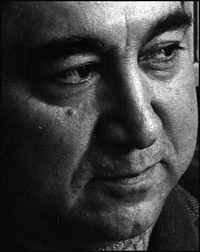 Aziz Nesin was a Turkish humorist and author of more than 100 books.
Nesin was born in 1915 on Heybeliada, one of the Princes' Islands of Istanbul, in the days of the Ottoman Empire. After serving as a career officer for several years, he became the editor of a series of satirical periodicals with a socialist slant. He was jailed several times and placed under surveillance by the National Security Service (MAH in Turkish) for his political views. Among the incriminating pieces of evidence they found against him during his military service was his theft and sale for 35 Lira of two goats intended for his company—a violation of clause 131/2 of the Military Penal Code. One 98-year-old former MAH officer named Neşet Güriş alleged that Nesin was in fact a MAH member, but this has been disputed

Nesin provided a strong indictment of the oppression and brutalization of the common man. He satirized bureaucracy and exposed economic inequities in stories that effectively combine local color and universal truths. Aziz Nesin has been presented with numerous awards in Turkey, Italy, Bulgaria and the former Soviet Union. His works have been translated into over thirty languages. During latter parts of his life he was said to be the only Turkish author who made a living only out of his earnings from his books.

On 6 June 1956, he married a coworker from the Akbaba magazine, Meral Çelen.

Aziz Nesin was a political activist. After the 1980 military coup led by Kenan Evren, the intelligentsia was oppressed. Aziz Nesin led a number of intellectuals to take a stand against the military government, by issuing the Petition of Intellectuals (Turkish: Aydınlar Dilekçesi).

He championed free speech, especially the right to criticize Islam without compromise. In early 1990s he started a translation of Salman Rushdie's controversial novel, The Satanic Verses. This made him a target for radical Islamist organizations, who were gaining popularity throughout Turkey. On July 2, 1993 while attending a mostly Alevi cultural festival in the central Anatolian city of Sivas a mob organized by radical Islamists gathered around the Madimak Hotel, where the festival attendants were accommodated, calling for Sharia and death to infidels. After hours of siege, the mob set the hotel on fire. After flames engulfed several lower floors of the hotel, firetrucks managed to get close, and Aziz Nesin and many guests of the hotel escaped. However, 37 people were killed. This event, also known as the Sivas massacre, was seen as a major assault on free speech and human rights in Turkey, and it deepened the rift between religious- and secular-minded people.

He devoted his last years to fighting ignorance and religious fundamentalism.

Aziz Nesin died on July 6 1995 due to a heart attack, after a book signing event in Çeşme, İzmir. After his death, his body was buried in an unknown location in the land of Nesin Foundation without any ceremony, as suggested by his will.