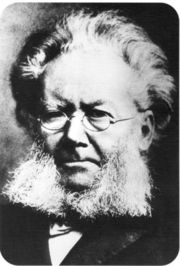 Henrik Johan Ibsen was a major Norwegian playwright largely responsible for the rise of modern realistic drama. He is often referred to as the "father of modern drama." Ibsen is held to be the greatest of Norwegian authors and one of the most important playwrights of all time, celebrated as a national symbol by Norwegians.

His plays were considered scandalous to many of his era, when Victorian values of family life and propriety largely held sway in Europe and any challenge to them was considered immoral and outrageous. Ibsen's work examined the realities that lay behind many facades, possessing a revelatory nature that was disquieting to many contemporaries.

Ibsen largely founded the modern stage by introducing a critical eye and free inquiry into the conditions of life and issues of morality. Victorian-era plays were expected to be moral dramas with noble protagonists pitted against darker forces; every drama was expected to result in a morally appropriate conclusion, meaning that goodness was to bring happiness, and immorality pain. Ibsen challenged this notion and the beliefs of his times and shattered the illusions of his audiences.